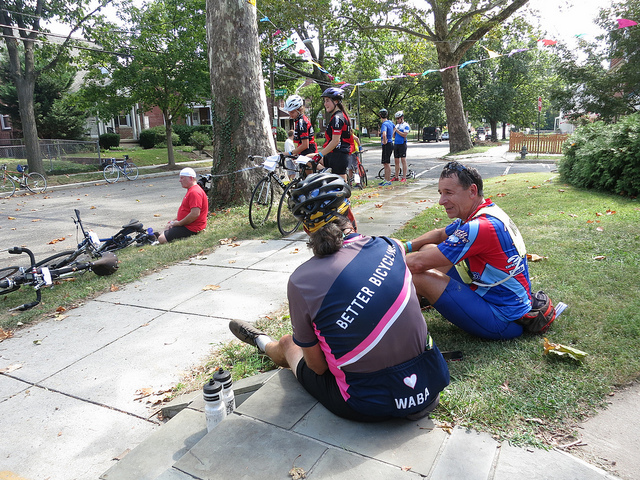 This weekend I rode the latest edition of the 50 States and 13 Colonies Ride, an annual fundraiser for the Washington Area Bicyclist Association. The main route route ties together all 50 state-named streets in the District of Columbia and is known for many hills and intersections.

For the second year in a row, I rode the entire route. In the past Mary and I shortcut the route to shorten the time – the rolling average is about 11 m.p.h. – and get to the afterparty sooner. Last year I rode solo while Mary ran a marathon, and pushed all the way around, just to say I did it.

This year Mary joined me about four miles into the ride after a snafu upended her marathon plan and she rallied to come out to ride the course. I rode my refurbished ’87 Bianchi Super Sport with fat 650b tires, while Mary piloted her lovely Rawland Nordavinden.

The weather was hot, well into the 90s, and the going was predictably slow. On my GPS track I count a minimum of 45 complete stops over the 62-mile route, and I would think that is undercounting them by a few. The route has about 3,000 feet of climbing, not all that much, but all in steep little segments that sap the legs.

The vibe is very celebratory for the first half, as talkative groups form to ride from stoplight to stoplight on quiet Saturday morning streets.

The riders break up after the midpoint after the hills of Anacostia, as more hills come into play in the Northeast and Northwest quadrants and legs get heavy.  It felt like an ultra-long commute:  more tiring from all the intersections and stops and starts and car traffic than the actual distance. We found a flat on Mary’s bike when we came out from lunch at District Taco, and that slowed us a bit more.

As such, we would never do it on tandem! The big bike would be too much to manage for me to pilot us around the cars, and for Mary having to get on and off the saddle all day.

WABA did their usual diligent job getting us started, though there were scores of people still checking in at the start at 8 a.m. in Adams Morgan. Everybody got out there in the end.

The rest stops were festive, including the annual one at mile 52 hosted by our cycling pal Mike and partner Lisa in Northwest at their home.

The Anacostia stop had a bit of homecoming scene, as we saw some of our randonneuring pals.

Thankfully, there was no rain, but it was just hot and humid going, especially when we were stopped at intersections. That gave us a chance to talk with fellow riders, however, including Boomer, who participates in Mary’s annual Coffeeneuring Challenge.

A number of Friday Coffee Club regulars lingered at the afterparty in Adams Morgan at the Mellow Mushroom, where we arrived after 3 p.m. I bought some WABA socks as a souvenir. We were pretty fried and the time enjoying a cold beverage and pizza with friends was really nice.

In case you want to see all my photos, I posted a little set.

We took Sunday off the bike. Both of us are feeling the recent miles, and Mary puts in a fair number of running miles each week in addition. It was a welcome break.

This coming weekend we’re back on the tandem at the Potomac Pedalers’ Back Roads Century in Shepherdstown, W.Va., one of our favorite towns in the region. Our pals Eric P. and Rudi R. are involved in the ride organization, so that got us to join the Pedalers this year and sign up for the ride.