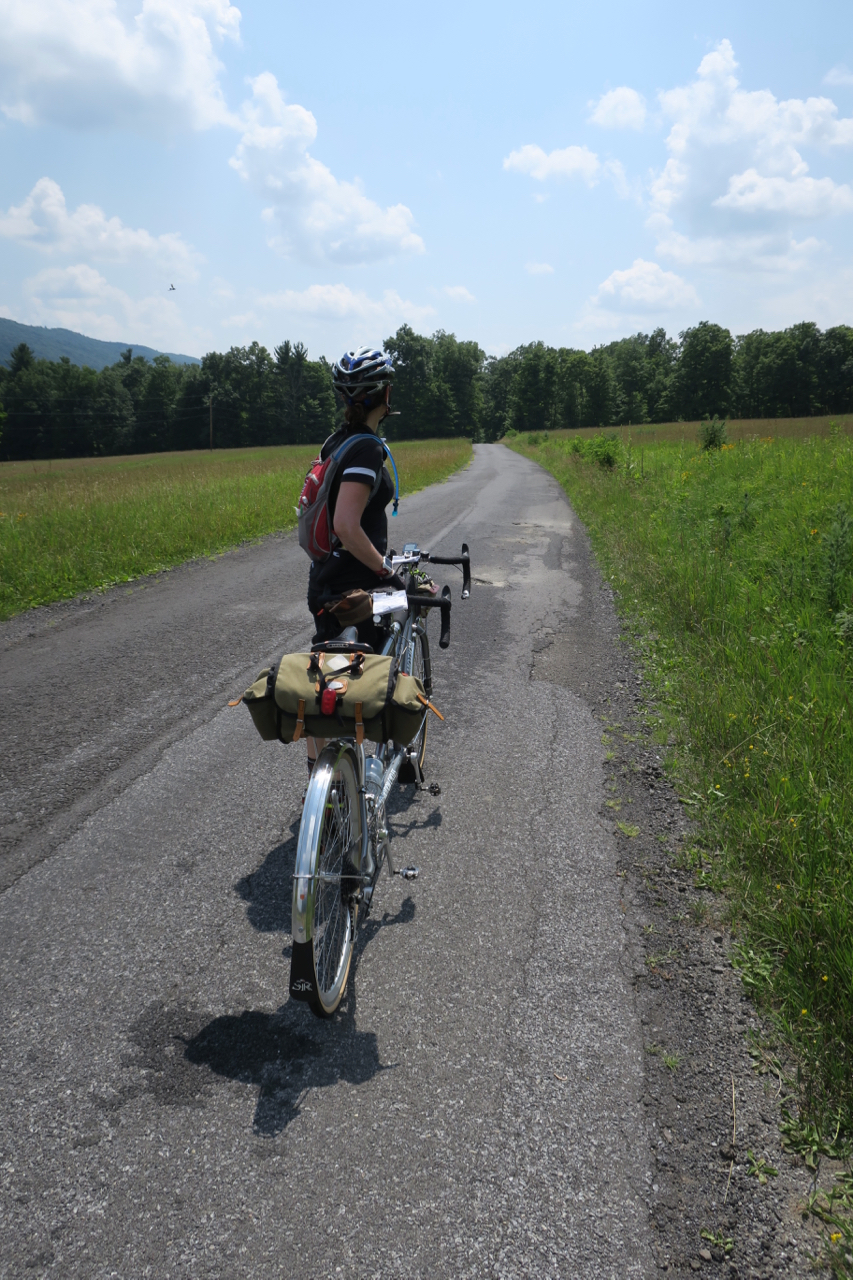 Good Wednesday morning! Mary and I find ourselves in a full recovery zone following the last and biggest preparation ride for the Coulee Challenge 1200K next month in Minnesota.

This weekend we bit off and chewed one of the tough 600K rides in the region, the famous/infamous Kit’nKish 600K permanent from Frederick, Md. The ride description is available here and the permanent owner’s GPS route is here.

This ride features remote, gnarly back roads that wind north through the Catoctins near Gettysburg and then over a series of long ascents through central Pennsylvania, with a total climbing of nearly 21,000 feet. Our GPS tracks are here: Day 1, 227 miles (missing two miles when I forgot to re-start the Garmin), and Day 2, 147 miles.

This isn’t a new course for us, so we knew what lay ahead, but we must have put the agonizing parts out of our minds.

We rode a 340-mile abbreviated version in 2014 and had our hands full. Then the D.C. Randonneurs staged it as a brevet in 2016 (which we did not attend) that was probably the only time it will be run due to low turnout (there was cold rain), and just 13 finished out of 21 starters.

In contrast, this weekend the forecast called for sunny, hot days. That was good in one respect: we wouldn’t need much to ride this course unsupported. On our Co-Motion Java touring tandem we packed a change of shorts and socks, light rain jackets, along with a fair amount of optimism.

Things got off to a weak start at 4 a.m. Saturday when the Sheetz store in Frederick we picked for our start had closed the kitchen for a plumbing problem. That meant no hot food or coffee drinks. Oh well; we stopped at the next Sheetz a couple of miles away and threw away 10 minutes right off the bat, but got that gas station cappuccino that shakes off the middle-of-the-night cobwebs. Mary wanted to charge on but I insisted; captaining the tandem requires caffeine.

By the time we were through the first long climbs of the day to South Mountain village at mile 43, crossing the Appalachian Trail in early morning light, the temperatures were in the 80s and the air was humid. The roads were exceptionally quiet.

At the Sheetz by the former Letterkenny Army Depot, mile 63, we ate and packed a cheese sub into the saddlebag, and talked with a young guy riding a bike pulling a homemade trailer with his dog in a storage tub doghouse. He was “in transition,” he said, and headed to Vermont. He said he wasn’t a touring rider like us; we said, “you are now!”

At East Waterford, Pa., mile 108, the noontime sun was blasting away and we ate in the shade outside Long’s Community Store. A local storyteller felt compelled to tell us about how he used to ride 70 miles all the time until his heart just stopped for no apparent reason. His doctor saved him and wanted to publish about it, he said. I felt like I was in a scene from the movie True Stories.

That was just what we needed to hear before throwing ourselves seven miles later at Blacklog Mountain Road like naive crusaders, a steep and unrelenting 2.3 mile/1,000 foot gain brute over Blacklog Mountain that defies low gears.

The road designers really sat down and figured out how to make this one memorable, with turns that didn’t help lessen the double-digit grade. We rode this last time, and it hurt, and somehow I thought things would be different in 2018.

Mary and I tried our hardest to ride all the way up but had to stop before the summit, overheated and out of breath. The tall crown in the center of the road made it impossible to traverse; we spent most of the way standing on the pedals in our lowest 26×36 gear.

Once we stopped hyperventilating, we managed to remount and summit, then took another break when my legs started cramping. On the bright side – and it was stunningly bright – we got to admire the views of central Pennsylvania’s lush, sharp green ridges.

We rode down and thought the worst was behind, but the reality was our legs were pretty much trashed with little opportunity to recover among all the hills. We rolled into the control at mile 146, in Three Springs, just over 12 hours after we started. You can do the math – the hills and heat made for slow going.

The rest of the evening was through gorgeous tree-lined back roads up north towards State College, some of which didn’t go up, but those sections were brief. We skipped the last possible places for an early dinner, near Huntingdon at mile 166, to save time.

A road closed sign gave us pause near Greenwood Furnace, as the sun was going down, but a nice lady told us about a detour around a bridge under construction. Turned out we could carefully walk the tandem across an earthen dam and got past the bridge outage, and I didn’t fall into the creek.

Then we got to climb Stone Mountain, but it wasn’t steep, and actually kind of pleasant in the fading light. A youth group was hanging out at Greenwood Furnace park, some of them singing around a guy with a guitar. Looked like a nice way to spend the evening.

The night trip through Mennonite farm lands, twinkling with fireflies, led us to Lewistown. Up to then the car traffic remained almost non-existent. I did my best impression of a windshield as bugs bounced off of me on the downhills, and kept my mouth shut to avoid any unwanted winged protein.

At Lewistown, some of the dregs of Saturday nightlife felt compelled to say things to us from their vehicles as we rode through downtown. I kept my helmet light on stun to shine at them. Everybody kept going, though, and again I kept my mouth shut.

We checked into the sleepy Econo Lodge at Mifflintown at midnight. Our room was on the second floor and there was no elevator, but we didn’t care. I dragged the big bike – affectionately named Pokey Pete – up the stairs. We were showered and asleep by 12:45.

A very light intermittent drizzle came on as Tuscarora Mountain loomed, a switchbacked climb of four miles to the high point of the route, 1,881 feet in elevation. We got up to the top with just one rest break, so not bad, but the clock was ticking. The descent was thrilling! We pegged our speed at 51 m.p.h. on a long straightaway part.

Our next challenge was another closed road. Oddly, this same road was closed four years ago when we rode here. We took the same detour as then, which included two lovely though steep climbs on Asper Hill Road, which added about a mile to the distance.

We made it to Newport and the following control in Carlisle each with minutes to spare, and then got over the last notable climb on Whiskey Springs Road to control in East Berlin, mile 314, at 1 p.m., with about 45 minutes to spare. Lucky for us the clouds kept temperatures in the low 80s. If it had been much hotter we might have timed out.

A coffee stop was in order in New Oxford at mile 321 to keep us awake. We were dragging, for sure, with drooping eyelids and pedaling squares. We weren’t suffering exactly, but we were counting the miles. The hot riding on Saturday gave us some saddle rash, which made every stop a minor relief.

Revived, if not invigorated, we cranked our way over small rollers through farm lands to the obligatory ice cream-and-Coke stop in Thurmont, Md, 21 miles from the end. We got back into Frederick to finish just after 6 p.m. for an official finish of 38:22.

By this time our start/finish Sheetz had closed for plumbing repairs, but there was another gas station next door and we controlled there. Mary grabbed cold Cokes for us to drink in celebration at our car in the nearby hotel parking lot, where we ended up talking with two different people who noticed the tandem. It sure does attract attention. They both asked where we rode – some local roads up to Pennsylvania was all we said.

This result was fair for us, compared to other times posted by riders who rode the brevet in 2016. With this much climbing in the heat, and being on tandem, we’d expect to come in about two hours later than our normal 600K finishing time.

There is also something about doing it alone, with nobody else at the controls and at the overnight stop to prompt us to keep the stops short. That said, we didn’t have any long restaurant meals and tried to stay on our feet at the stores rather than sit down.

We feel more than ready to taper to the Coulee 1200, which starts in less than a month. We’ve tried to ride a mini-brevet season over the last six weeks and our legs tell us we’ve got the miles.

Thanks to Crista Borras for the route and processing our permanent results! And a long-distance hello to our world-touring pal Jerry Seager (and partner Carolyn C.), who rode with us in 2014 when we were preparing for the D.C. Randonneurs’ Appalachian Adventure 1000K.

And – thanks for reading!

4 thoughts on “Kit’nKish 600K: Before and After Blacklog Mountain”