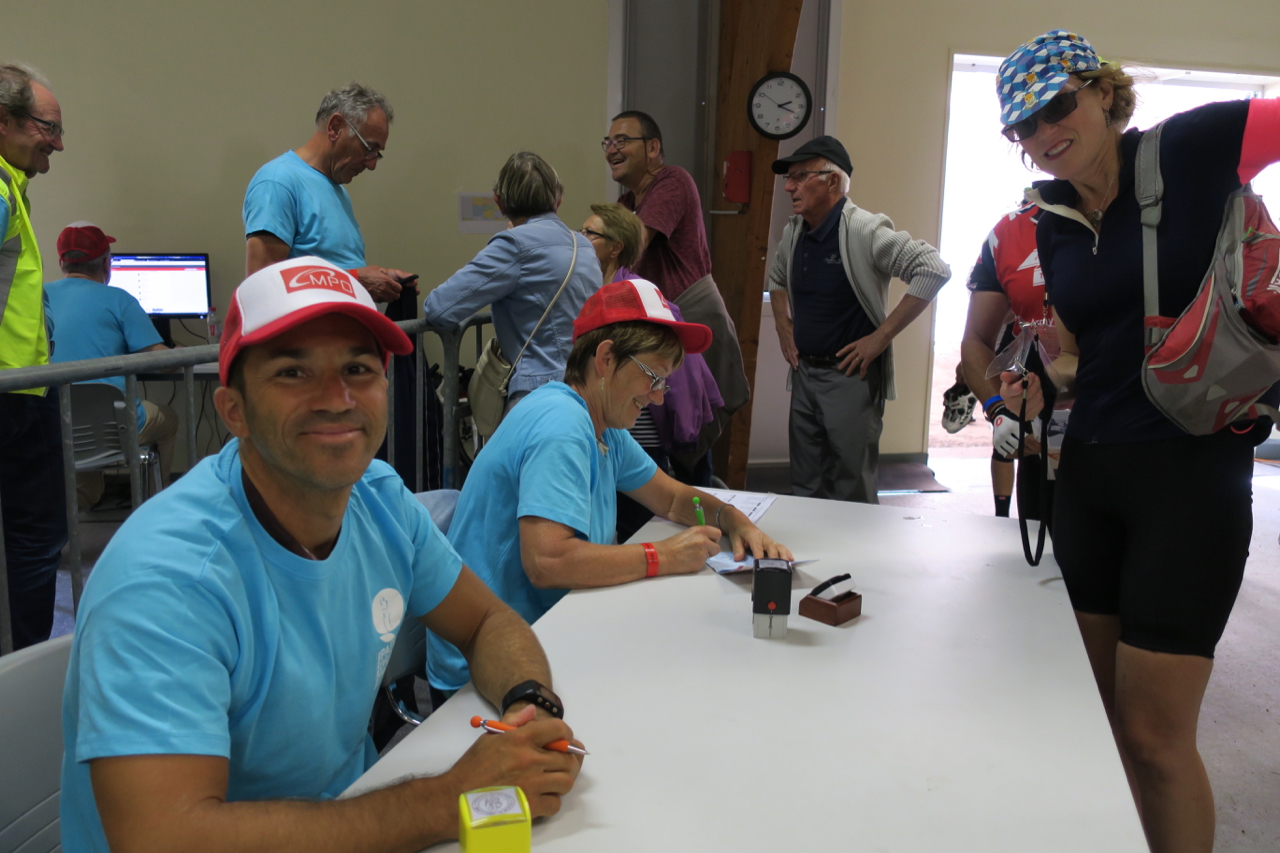 Ten days have passed since the end of Paris-Brest-Paris 2019 and the emotions are only getting stronger as I get caught up on sleep and look through photos.

For us, the quadrennial international gathering of randonneurs lived up to the hype, as it always does. It is the most immersive bike event I can imagine: four days (plus pre-ride social activities) of old-school French cycling tradition, crazy adrenaline and long hours grinding over endless hills, all overlaid with mounting sleep deprivation.

Oh and lots of food, so much food.

The only thing I can compare it to is a combination wedding reception and marathon that went on for four days and nights.

This was my fifth PBP and second on tandem with Mary; we last rode in 2011. The eight years’ absence wiped away some of the familiarity with PBP and made the ride feel new and different.

Mary had her own feelings about PBP: she felt the relentless pressure of time, and the pleasure of sleeping on a gym floor in Mortagne on the third night, when we had built up enough spare time to get out of the cold dark night. See her post here.

Our control splits were about the same as in 2011, save for a late arrival in Loudeac on Day 1, at 2:40 a.m., because of headwinds. We would have been later if not for the PBP course being shortened a few kilometers because of the Rambouillet start.

Our first day was actually longer: we rode from our hotel in Saint Quentin-en-Yvelines at 3 a.m. for the 5 a.m. 84-hour group start, adding 30 kilometers (in statute distance, we ended the day with 296 miles, a one-day record for us). That ride had a sublime feel to it – I loved the quiet 75 minutes of riding together before the controlled mayhem that is a PBP start.

We ended up with the comfortable buffer we planned, with three sleep stops along the way for a total of about eight hours sleep. Two stops were at the Voyageurs hotel in Loudeac (outbound on Day 1 and return on Day 2) and the other was as the control in Mortagne in the rather comfortable heated gym.

The schedule also let us take a short nap in the grass at Fougeres on Day 3 and dismount for roadside coffee and treats stands, notably the longstanding send-a-postcard crepe stop in La Tanniere.

Socially, this was a winner for us. We planned to ride with our cycling and real-life buddy Jerry Seager, formerly local to us in D.C. but now headed with his partner Carolyn to Seattle after an 18-month world cycling tour. Jerry was in fine condition and the plan worked to perfection. Carolyn worked as a volunteer in Rambouillet and it was a awesome to see her at the finish!

We also had spent three of the four days with a group from the San Francisco Randonneurs, led by the local RBA Rob Hawks, with Roy Ross (who has a hilarious Strava profile), Anson Moore and fast guy Brian Koss, who dialed it back at times to ride with us.

Our fellow D.C. Randonneurs pals in the 84-hour group – Roger Hillas, Chip Adams, Gavin Biebuyck, Bill Fischer and Chris Newsom – rode in the vicinity and we saw them regularly.

Emotionally, this one was a rollercoaster. Make no mistake, PBP is a very hard ride with never-ending hills and constant dangers, especially being on tandem with its large road presence and big momentum swings.

I had more than a few moments of wishing to be in a warm bed and not looking to avoid someone stopped in the dark road for no apparent reason or make it unscathed through the next roundabout.

It felt much colder at night than I expected and we had hours of relative mental challenge pushing to get to the overnight controls. We also had to deal with large groups of riders gathering behind us to draft. Apparently there was some kind of war-for-our-wheel going on during the night ride back to Loudeac.

All that was offset by the French support for PBP, especially in Brittany, which appears to be getting only stronger. We were buoyed in equal measure by friendly popup coffee tents and the tremendous volunteer ranks at the controls, who were always cheerful and ready to help.

The encouragement along the route was overwhelming sometimes. The control towns (other than busy Brest, ugh) pulled out all the stops to make sure everyone was fed and cared for. I wanted to hug everyone!

Thanks also to our riding partners, who kept the mood upbeat and morale high. I have a hard time with negativity on long rides, I’ll admit, and the group was solid in that regard.

Rather than drag you through a boring ride report, I respectfully offer some observations about our experience. If you skip the rest, here’s the bottom line: PBP, for all its rigors, remains among the most loved and unique events in the world.

What we learned on this year’s PBP:

Winter training pays off: I put in regular hour-long intensity sessions on the home trainer during the dark months and it helped. I had legs as good as I remember from 2011, maybe even better as we had to push into headwinds to Brest and got there with time to spare.

I had some quadriceps, knee and ankle aches during hard efforts later in PBP, but backing off the pace made those pains go away.

The two-summer prep plan also pays off: As we did before the Coulee Challenge 1200K last year, our final rides before PBP were as hilly as we could make them. Rides in West Virginia and central Pennsylvania culminated in the gripping Kit’n’Kish 600K permanent in late July, with more than 20,000 feet of climbing. We then took three weeks easy before PBP, and our legs felt strong and fresh.

Getting a new tandem was totally worth it: Our steed this time was a new custom 650b Co-Motion Java travel tandem with tweaked fit compared to our touring tandem. Due to some miscommunications with Co-Mo, it did not get into our hands until late June. Luckily we rode it enough before PBP to iron out the kinks, which were few.

The fit was superb! My hands, neck and lower back never ached.

Our only niggle was the headset, which oddly knocked on out-of-the-saddle climbing when the day warmed up, and went away at night. Tightening didn’t really help but it held up fine to the finish.

Early arrival, quiet surroundings, good sleep: It was interesting to see so many people arrive on Thursday or Friday before the event. We got in on Wednesday morning with our friend Tim Foon Feldman from Boulder. I could see arriving on Tuesday, actually. The trip felt a little rushed, even though our inspection was not until Sunday and start on Monday.

Sleep came easy at the serene, full-service Novotel Golf Course in Saint Quentin, which appeared to be half-empty. We kept the sightseeing to just one day in Paris, which we enjoyed with Jerry and Carolyn. The idea was to get over the jet lag and not tire our legs.

Chartres, the amazing: As we did in 2011, a group of us rode to Chartres on Thursday to see the magnificent cathedral and get settled on the bike. I loved this ride, with a casual lunch and a walk through the cathedral, where I lit a candle for a safe journey for everyone at PBP. Thanks team!

It always rains at PBP: It has rained on my five PBP rides, but this time the wet was rather brief, less than an hour on the first evening.

Put on everything: The downside of all those clear skies? Cold nights. The temperatures dropped to the upper 30s in some sections, and I had to put up with cold feet and ears, having left booties and a head wrap at home. A humble bandana around my neck did wonders, as did knee warmers that stayed on most of the event.

I had enough layers to keep warm, mostly. Luckily I stuffed a wool base layer in the drop bag and it saved me on the second and third nights.

Villaines la Juhel for the win: This village turns out like no other for PBP. We left toward Brest with the announcer calling for everyone to applaud us, and we left toward Paris at nightfall to another round of tremendous cheers. Oh Villaines!

Night lights: After all the excitement in Villianes on the return trip, we had to face one of the tougher segments of PBP. The ride from Villaines to Mortagne au Perche was the usual mind-bending procession of red taillights into the black night, broken up only by the town of Mamers.

Much gratitude to whoever set up the coffee and cookies tent in Mamers that kept us from going completely mad. Our group regathered there and we saw some familiar faces: Kelly Smith from the D.C. Randonneurs and our Ireland acquaintance, Jonathan Bliss. I also got a pic with Japan randonneur Kento Inatomi who looked like he needed some conversation. The ride went faster after that.

Luck saves us: We had one spill. I drifted right to avoid an oncoming truck in a town close to the return to Loudeac (Treve, I think) in the dark, and caught a low sidewalk edge. I popped us onto the sidewalk to avoid wiping out, and despite braking we ran slowly into a building. Chris Froome, I feel you man.

The tandem tipped over from the stop and Mary ended up underneath with a bruised little finger (the exact quote was ‘effed up!’), but nothing worse and the bike was undamaged. It was kinda scary, still.

Been there, going back: I said going into this PBP that it would be my last. Haha! Getting prepared as we felt necessary was a huge effort, but it was so worth it.

Congratulations to all the finishers. Thank you volunteers and Audax Club Parisien. Mary, you are without fail the most supportive and strong partner on the bike and in my life. This was a true team accomplishment.

Merci, France. We love you. I hope you feel the same about us.

12 thoughts on “A love letter to Paris-Brest-Paris”