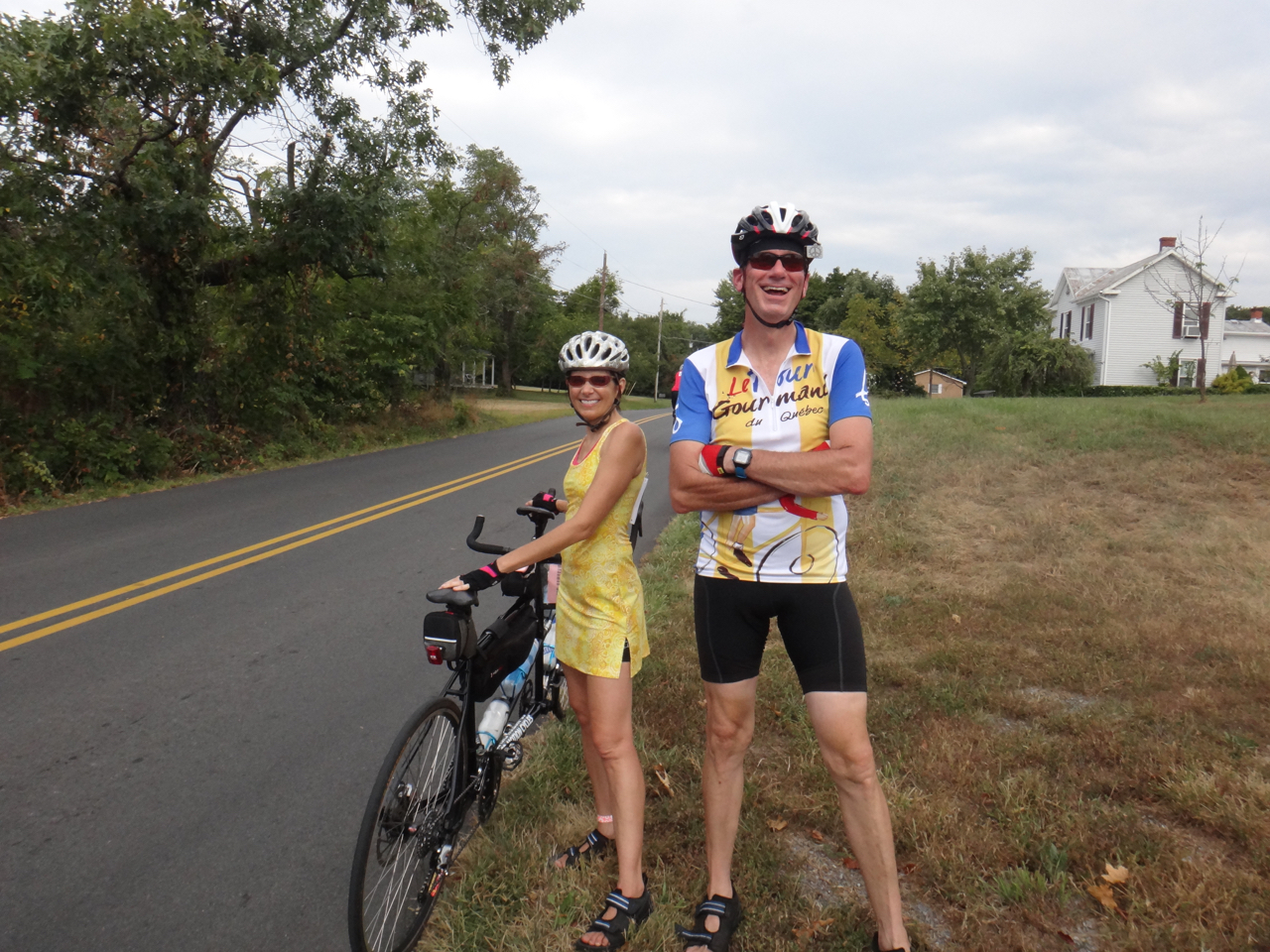 After a long time away, I rejoined the Potomac Pedalers Touring Club this year, specifically to ride the Back Roads Century.

The club moved it last year from its longtime location in Berryville, Va. to lovely Shepherdstown, W.Va., and routed it over the rolling hills of the state’s eastern panhandle.  The reviews were good and we know two of the organizers, Eric Pilsk and Rudy Riet, so that got me and Mary interested.

The forecast this last Sunday was mixed, with showers predicted, so Mary took the day off from riding while I grabbed a single bike and went out to Shepherdstown all by myself. I did everything I could to ward off the rain, such as bringing a rain jacket, carrying my rainproof camera and riding with full fenders, among other it’s-going-to-rain strategies, which involved a fair number of Ziploc bags. I even left my tinted sunglasses in the car and rode with clear lenses.

The rain never appeared, to everyone’s delight, and the support and route were terrific. I rode with a number of Friday Coffee Club regulars, just like at the 50 States Ride last weekend, but this time out on the open roads.

Here is the route at my Garmin page.  The full set of photos can be seen at my Flickr page.

I had to stop at Lost Dog, a Shepherdstown institution.  Here you can see the Rivendell Rambouillet I rode today.

The ride was well stretched out by the time I got on the route about 8 a.m. The hills did a good job in splitting up the big groups, which made for easy riding.

Mike was out there. It was our first time riding together with neither of us on tandem.

John had his Surly out and we shared a few miles.

These guys, like us, dabble both in the randonneuring and big event rides.

Jean and Dave always look like they are having fun. Today was no exception, and they gave me a nice draft on this section.

It was a delight to see Kay and Gordon, our touring companions from Labor Day weekend. They were decked out in red and black.

The Pedalers did a good job at the rest stops. This one at mile 61 had hummus sandwiches and lots of mini-Clif Bars.

Though it was warm and humid at mile 83.5 at the Yankauer Nature Preserve, the potatoes hit the spot and got me back to the finish.

This coming weekend, Mary and I are off the bike for a trip to Pittsburgh to see my daughter, who is in her first semester of college at Pitt. We’re also going to the Thrival Festival to stand in a field with thousands of people and listen to modern music. See you next week!